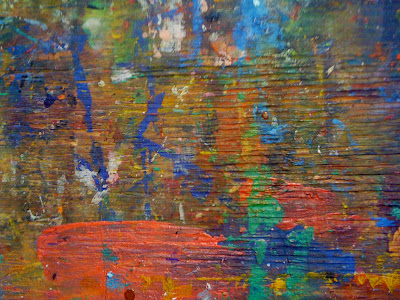 #WordlessWednesday
Posted by Cyn Huddleston at 11:02 AM 5 comments:

Consider This as Me Swooping In

Some time later, no one came to save me. No one swooped in to pull me back, giving me hope, listing my talents, telling me I was loved. No medic pumped my stomach or injected me with death-defying drugs. No gathering of friends made me comfort food while joking about dead-serious topics. The most desired love of my life didn't shake me and make me promise never to leave him ever again. None of the movie situations happened.

I just woke up.

When I say it now, as I have many times when I talk about suicide, I shiver a little. I have listed the things I swallowed on paper. It was every pill I could get. It was enough. More than enough. But I woke up.

I don't know why or how. I do have some strange chemical composition. Mosquitoes won't bite me. Never. If one lands, it hurries away. Coffee doesn't keep me awake. Other things. For some reason, the lethal dose of drugs I swallowed and processed through my body gave me a long, deep sleep. And then I woke up, very thirsty, a little queasy but alive.

I have severe depression, which most often presents itself in me as a cancer of the will to live. Medications put me in remission. Talk therapy keeps me waking up from month to month. My love for the view of deep blue in my daughter's eyes keeps me alive when all else fails.

But I still occasionally find myself face down on the tiled floor of my front hall wanting to die. It's not such a bad place to be for those times. There aren't any sharp objects, pills, weapons, ropes, or anything dangerous within my reach there. A cat or dog will usually lick my face or climb on my back or both. Time passes. I get up on my grievously bad RA knees and go back to living.

You can't depend on someone else saving you. Robin Williams' homeless, broken former professor character in The Fisher King saves Jeff Bridges' suicidal shock-jock character. That was just the movies.

Sometimes no one comes. And you will not wake up from those pills. You just won't. Suicide is not romantic. There is nothing less romantic than a dead body.

I am known for my angry response to someone's suicide. There is nothing worse than seeing your own mistakes played out in front of you. I worry that others, particularly teens, will follow the leader. I grieve the mothers that ache for a view of blue or brown or green eyes.

But I am also known for my ability to hear the pain you want to pour out like the blood dripping from a cut wrist. I understand that it just hurts so much. That it won't stop. That the chemicals in your brain are trying to make the chemicals that move your muscles kill you.

If you want to talk or find help, I am your girl. Call or text or FB message or come over.

But you are going to have to save yourself from the pills or rope or sharp things by asking. Robin Williams can't swoop in like in the movies and pull you back from the fire.

Email ThisBlogThis!Share to TwitterShare to FacebookShare to Pinterest
Labels: life's important things, Robin Williams, suicide prevention, The Fisher King, Things I am pretty sure of, trauma

The Word is "Love"

You don't need to be Superman to have super powers.

My friend Mindy wrote on our word this week about a guy who loved without obligation. You should read that first.

My oldest sister, who knew him before he was a raging drunk, says my dad was stupid in love with my mom. Totally gaga. He had to be. The one thing he ever did to defy his mother was to marry mine.

And everything was peachy until something came between him and his true love. Took her time. Divided her loyalties. Broke up his ideal life of a woman in total devotion to him. We happened to him. His children.

Some of us fared better than others.

I didn't have the worst of it by a long shot. He treated me, when he was paying any attention at all, as a kind of toy. I was a talking yo-yo, or maybe a smart set of jacks. He could use me to amaze the trashy women he flirted with at the bar we frequented while my mother earned money for the family.

"She's a little cutie, Jim. I'm gonna buy her some peanuts." From toy to circus monkey.

Worst was when Daddy used me like a marionette, pulling the strings to dance me around like a favorite in order to torment another sibling. Too little to understand the manipulation, I was made a partner in his cruelty.

Although this business wasn't the reason I only had one child, I have often thought it a blessing I couldn't repeat that little Punch and Judy show with my own kids.

It's true. Glasses on his face, affable smile, and mild-mannered down to his sensible shoes.

From the day we met, he loved me so much it was fearsome to behold. Totally gaga. So in love, he wouldn't protect himself from the love and openly told me how he couldn't believe I was with him. He bared his heart in his chest and stuck my hand inside, pressing my fingers around the pulsing muscular lump of it. Every beat said It's yours.

Wake in the night to whispers in my ear. "Are you sure you want to marry me?"

And we had a child. And here is where I became suspicious that he was wearing red and blue tights underneath his clothes.

He was smitten. Knocked out crazy over the moon gaga over that girl.

Every minute of his life as a father has been the antithesis of what my own Daddy represented. He gave our daughter so much -- support, guidance, unconditional love. Best of all, he loves her mother. He never made being a family a game of musical chairs where one could find herself on the outside looking in, wishing for love and respect.

It's his birthday this week. This is my present for my Clark Kent. Thank you, honey. I'm still sure.
Posted by Cyn Huddleston at 1:40 PM 5 comments:

The Word is "Waiting"

Every December, Adrian takes off between Christmas and New Year's Day. This year, he doesn't go back until Monday, 6 January. Since 2007, I have been on break from classes every Christmas, too. We huddle on the couch in our pajamas, binge watch some good TV series or movies, and eat too much.

I graduated in May of 2013. There are no natural breaks in my year since I became a novelist. I grant my own vacations. So, I have taken a break from writing, except for these prompts from my writing group. The word is "Waiting."

I am, by nature, an active waiter. When I am at the pharmacy, I pull out my iPad and read or write. If I am ready for someone to pick me up at home, I clean things while checking the window occasionally. I even tidy up my makeup drawer while stuck timing my hair color. Twenty minutes is just about right.

It would seem I have to be puttering around all the time. Busy, busy.

I can sit and stare out the window or lie about on the deck on a chaise lounge, weather permitting, and just be there, doing nothing more than breathing and noticing the sights and sounds around me.

I am able to close my eyes in just about any situation and meditate my way into a calm state that reduces pain.

Sitting and staring in nature came to me when I spent lots of time as a child up a tree. Because of my age, I was between groups of kids in my rural home. I don't socialize well or gladly. I spent a lot of time alone.

The first years, I would wander on the ground under the trees on my grandparents' farm or in the fields on their out-lying property. I was earth-bound, a natural putterer. My grandmother Tommie encouraged me to branch out. She showed me how to get under the house with a casual, "Watch out for snakes. Make noise." She led me to the attic access and told me how to step on the rafters. My first high spot was a window in that attic. From there, I could see Tommie and Granddaddy taking the afternoon rest under a maple tree as they read the newspaper.

Years later, my grandparents retired from farming to their smaller house up on the hill, the one I had lived in when they farmed. The property had, and still has, the most amazing black oak trees. In a community with no two-story houses, the attic of the farmhouse had seemed high. On the hill, those trees were the top of the world, as I knew it.

Still fearless for me when I couldn't be for myself, Tommie instructed me in the art of climbing a tree. Pick a low limb with a forked branch that will hold your weight. Grab each branch, facing into the fork. Let your weight fall back as you throw your feet up into the space between your arms and the forked branch. Wrap your knees around the branch. Hook your toes around the limbs and use your thigh muscles to assist your arms as they pull you into the tree. Stand up from the sitting position and feel for a limb above you to steady you as you walk the limb up to the trunk of the tree. 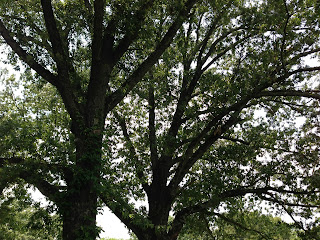 And the tree will talk to you. The stories a tree will tell can wait for another word prompt.