I watched Sunday on CBS with Jane Paulie. A reporter (?) interviewed some hurting people who are "low class," as one woman described herself with not a bit of shame or artifice. She talked of her troubles. She's a young woman, 20s, who said the closing of the coal mines because of EPA and environmental concerns split families. Men go off to work as they can find it and women and children stay put in the "home where [her] family lived for generations."

1) No one in government is going to get those coal jobs (or manufacturing jobs) back. I don't think anyone who promised to meant a word. And the Democrats in congress can block a lot of votes to prevent environmental apocalypse. (The Rs don't have 60%.)

B. Any major shift in work life (early mankind adopting agriculture, the industrial revolution, the rise of .com and e-commerce) brings upheaval. Some changes are good. Some are bad. Some changes are split between good for one and bad for another. All changes have required some people to adapt to relocation, loss of livelihood, and great stress. Former hunter/gatherers didn't hire guides when they could now grow their own. Large numbers of farm workers moved from rural areas to get manufacturing jobs in cities, many women, many exploited. And now, like me, Adam, and Ariane, some work from home by computer rather than going into a job in town. And steelworkers and coal miners have no jobs near home.

The "low class" woman reminds me of myself. I needed to create a whole new way to be in the world, more because of bad family issues than national issues. I had few resources. The military got me the hell out of town. And the things that were untenable back home were improved. I had to leave my home and some dear people. But my daughter is in much better position than she'd have been in had I stayed.

The woman who faces a split family and hard times gets my sympathy and empathy. I want her to find a way to have a good family life and plenty. I'm willing to pay taxes to get her and/or her husband some retraining. I'd support tax breaks if they have to move.

But I won't give her what she wants. I won't support reopening those coal mines. It's wrong for more people than it is right for. I'm sorry. She's in for hard times to come this next four years.

Later this morning, I learned Elton John has the photo "Migrant Mother" by Dorothea Lange. 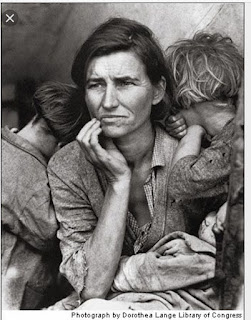 It seemed fitting to put her here.

Email ThisBlogThis!Share to TwitterShare to FacebookShare to Pinterest
Labels: The Progressive Life, Things I am pretty sure of, Trump

Feel free to critique the poetry. I employ a sophisticated thick hide technology.